Surveys are important for companies in many aspects, be it starting an organisation, marketing, knowing their customers or making strategic decisions. With the rise in technology, it has become easier for companies to get in touch with customers. On the other hand, customers are also becoming more reactive and outspoken. Because of these factors, it becomes imperative to consider potential controversies that survey language and certain topics may have and its resulting impact on the output data.

Surveys are just like conversation companies build with the customer. And like any other conversation, people refrain from personal or sensitive questions. Customers might react differently to these questions. They might end up getting offended or tweak their responses to sound “socially acceptable”. So, what are the kinds of sensitive questions that can offend people?

Sensitive Questions That Can Offend People

Often customers are not comfortable discussing their salary or household income as they believe it differentiates classes. Moreover, unemployed individuals may get offended by the question. When it comes to asking this question, keep a wide range of income field that will make it easy for the company as well as customers to identify themselves in a bracket. Example:

Target audience of the survey might be extremely diverse and asking questions about education might be offensive for the less educated compared to the highly educated customers. In this scenario, provide more options covering all education levels. Explaining the purpose of the survey will also help in customers being honest in their responses. Example: 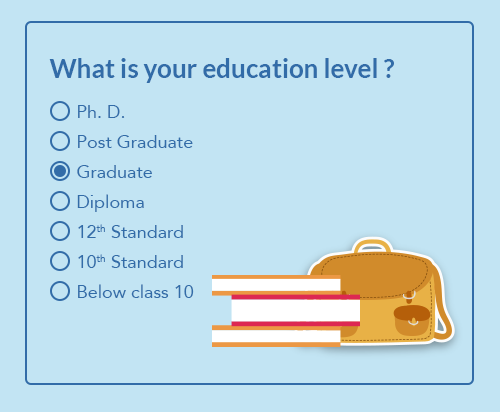 The above covers all levels of education and not offending the less educated.

Personal Care and health issues are other topics people might be uncomfortable giving honest responses. Questions about diseases running in the family might fall into this bracket. Questions like ‘How often do you wash your hair in a week?’ would not be appropriate for some people. ‘Name any diseases that run in your family’ is also an offensive question as it questions the well-being of not only the individual but the entire family.

Addictions like drinking, smoking, drug abuse, etc are often not answered honestly. Media has made the population more sensitive about these issues. To be sure that people are not offended, the tone of the questions should be soft. For Example, if you're asking on drinking habit, it should be pitched - How often do you consume alcohol? rather asking Are you an alcoholic?

It is very important to consider the cultural sensitivity of people before making questions for a survey. Certain topics might not be very sensitive in a country but might be considered very offensive in some other country. For example, for a country having a majority Muslim crowd will not appreciate a question about consumption of alcohol. At the same time, in other regions, the same question might be valuable. It is necessary to consider a wider variety of response choices in today’s world.

In many Asian countries, topics related to government or politics are very sensitive. They can be conducted only by selected organisations. Even if your company is not dealing with government or politics directly, it is essential to word everything that might slightly be considered political. This stands relevant in segmentation where respondents must answer with a yes or no for the statement. Example: I like to voice my opinion _________. This might be considered as a comment on the government.

There are many more topics that might be sensitive for individuals but asking it in the right way will solve the problem for surveyors. Research surveys are meant to gain insights and not controversies.

Here’s something you can do to deal with sensitive questions.

1. Research well on the cultural, political and religious norms of the region where the survey needs to be conducted.

2. Do not base this on one person’s perspective only. Ask people around to view their understanding of sensitivity of the region.

3. Use a language that is clear to people without any hidden meaning. Giving an option to customers to decline a survey and still get rewarded will also be helpful for people who might get offended by certain questions.

4. Be transparent to the customers about the reason behind the survey and who is using data and for what study do they need it.

5. Give customers an option to give their responses later. Some people prefer to be honest when they are alone and not in a public place due to the fear of judgement.

6. Ensure the customers that their responses will be confidential and used only by the company for their survey purpose. Ensuring them that the data will not be out in public hands will make it easy for them to be honest.

It is natural for customers to feel uncomfortable talking about sensitive issues in surveys as they do not know the company or organisations. Hence, they might feel reluctant to answer questions honestly or skip the survey entirely. Therefore, it’s extremely important to frame your questions right, inform the customers about the company and purpose of the survey. Guarantee them anonymity of their responses. In this way, companies can conduct successful surveys without offending anybody and getting honest and valuable responses.

The ‘Dos’ and 'Don'ts' of Creating Survey Questionnaire

Why Should You Opt for Paperless Surveys?